Du Fu Thatched Cottage (杜甫草堂) is a 24-acre (97,000 m2) park and museum in honour of the Tang dynasty poet Du Fu at the western outskirts of Chengdu, adjacent to the Huanhua Xi (Flower Rinsing Creek).

In 1961 the Chinese government made the cottage a National Heritage site.

In 759 Du Fu moved to Chengdu, built a thatched hut near the Flower Rinsing Creek and lived there for four years. The “thatched hut” period was the peak of Du’s creativity, during which he wrote two hundred and forty poems, among them “My Thatched Hut was torn apart by Autumn Wind” and “The Prime Minister of Shu”.

Du Fu Thatched Cottage is now a popular destination for Du enthusiasts around the world to pay tribute to the poet.

Many rich families in ancient China have been donating money for decades to keep this cottage in its the best state.

It was also a sign of wealth and power back then to be able to donate money. The donator’s name is usually carved on a wall next to the cottage, in order to thank them for this feat. One of the families known to donate money is a branch of the Zhang family, which ruled part of 湖北 back then. 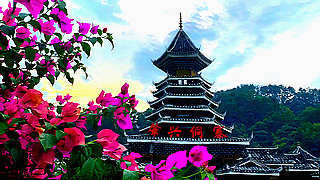